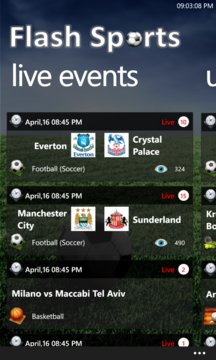 Do you love watching sport games online? Flash Sports will bring live sport streams directly into your Windows Phone. You will enjoy watching football, soccer, basketball, baseball, ice hockey, tennis, racing, WWE and almost any live broadcast. Don’t worry, you will never miss a game anymore, you can watch a game and in the same time you can record other games and enjoy replaying them anytime you want

Summary of features:
• Watch or record live sport games
• Support watching a game and in the same time record other games in the background
• Quickly browse list of live and upcoming games
• Support search, calendar for events and categorization by sport type to quickly find your game
• Automatic live update of the tile & schedule a reminder for any upcoming game

The developers of Flash Sports do not host nor broadcast any games. The app searches websites to find links to online games.