Published By Mobility in Life applications 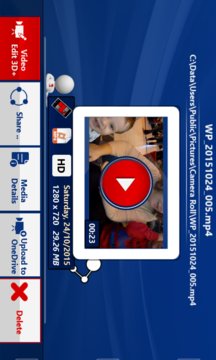 (November 2018: 2.8 Million Users, Overall Rating: 4.2/5.0.... Thank you!!!)
my VIDEOS 3D+ is an innovative cloud media player that extends the visual feeling in your WP. Play, View, Edit or Share directly any video or audio file from your phone storage or SD card, or Play/Download any video/audio from your OneDrive, Google Drive or Dropbox or from Youtube (using a special toolbar).
The player uses the powerful FFMPEG library and it supports almost all video or audio codecs that may exist, so you will not worry about the media file types. It plays everything!
The player supports:
- 16 Real-time Video Effects (included 3D mode!), described below
- Adjust the brightness, the saturation and the contrast of the video (for dark videos)
- Rotate the video with 6 options (vertically, flip horizontally, etc)
- Adjust the Playback Speed of the video or the audio file (Slow Motion, Fast Forward, etc. 10 modes in total) !
- Capture snapshots from the video and auto-save them to the Pictures folder during playback
- Replay, Play, Pause, Move back or forward, Skip positions
- Full Screen View or Normal View
- Adjust the volume
- Switch modes without stop

The application provides many different List Views to the user, including the media files of the Videos Library and the Camera Roll, the audio files from the Music Library and a list with the recently played videos.
For each cloud account (OneDrive, DropBox or Google Drive) similar lists are provided to the user in order to choose what to play or download in his/her phone.

For each media file (video or audio) you are able to view or edit it's media properties: title, subtitle, track number, album, artist, the video location in a map, etc...

You are able to share each media file with other apps!!

You are able to edit directly every video in your phone with the use of our other free app "Video Edit 3D+", with options to trim, add background audio, save the video with effects, change resolution or format, etc...

As far as we know there isn’t such application exist for any smartphone platform (iPhone, Android , Windows) so we are very proud!