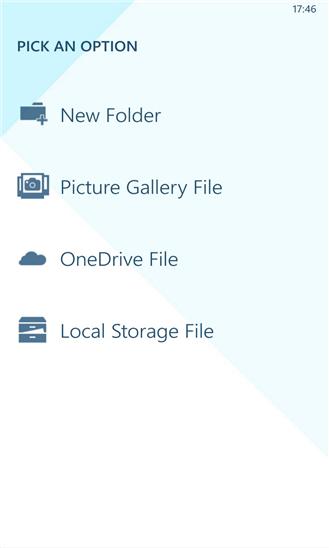 MetroDrive is the hottest Google Drive Client For Windows Phone! This lightning fast and fully functional Google Drive Client allows you to Easily and Conveniently Open, Edit, and Share your all of your Google Drive Files on your Windows Phone. Wow! -- Full integration with OneDrive(SkyDrive) is supported! -- FEATURES: --> OneDrive(SkyDrive) Integration for easy access and swapping of files between OneDrive and Google Drive --> Access Multiple Google Accounts --> Access Multiple OneDrive(SkyDrive)Accounts --> Open and Edit your Google Docs - Spreadsheets, Docs, and Presentations --> Open and Edit MS Office docs saved on your Google Drive --> Open PDF, ZIP, and Pictures from your Google Drive --> Share your files with others from your Windows Phone --> Create New Folders --> Upload Pictures --> Upload to OneDrive(SkyDrive) --> Check your Local Storage --> Star Important Documents for Easy Access Later --> View your Recent, Shared, and Trashed Files with one tap Essentially, our MetroDrive app gives you easy access to your folders, documents, hidden files, owned by me, starred, and trash. Although you will find the first release very helpful, we are already making plans for the second release. However, we need your help! Be sure to give us your feedback and suggestions so that we can use your input for the development of the second version of MetroDrive. Quick & easy access to files in: - Folders - Documents - Hidden files - Owned by me - Starred - Trash