Darby Translation. Old Testament and New Testament.The Darby Bible (DBY, formal title The Holy Scriptures: A New Translation from the Original Languages by J. N. Darby) refers to the Bible as translated from Hebrew and ... Read More > or Download Now > 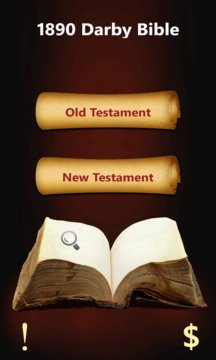 Darby Translation. Old Testament and New Testament.
The Darby Bible (DBY, formal title The Holy Scriptures: A New Translation from the Original Languages by J. N. Darby) refers to the Bible as translated from Hebrew and Greek by John Nelson Darby. Darby published a translation of the New Testament in 1867, with revised editions in 1872 and 1884. After his death, some of his students produced an Old Testament translation based on Darby's French and German translations (see below). The complete Darby Bible, including Darby's 3rd edition New Testament and his students' Old Testament, was first published in 1890.
J. N. Darby's purpose was, as he states in the preface to his English NT, to make a modern translation for the unlearned who have neither access to manuscript texts nor training and knowledge of ancient languages of the Scriptures. He was the principal scholar for a number of translations – and not the sole translator of any one of the various translations that bear his name. He worked with various brethren who had academic and spiritual qualifications. He also acknowledges dependence on the critical work of Samuel Prideaux Tregelles and various other scholars. Darby's translation work was not intended to be read aloud. His work was for study and private use. In his own oral ministry he generally used the English KJV.
When Mr. Darby first issued his New Translation into English he wrote in the preface to the Revelation 'if the reader find my translation exceedingly similar to Mr. William Kelly's, I can only rejoice in it, as mine was made a year or two before his came out, and he has never seen mine up to the time of my writing this . . .' (Darby went on to write that his New Testament translation had been lying by him for some years then). In his introduction to the 1890, German version, he wrote, "In the issue of this translation, the purpose is not to offer to the man of letters a learned work, but rather to provide the simple and unlearned reader with as exact a translation as possible."
In the Old Testament Darby translates the covenant name of God as "Jehovah" instead of rendering it "LORD" or "GOD" (in all capital letters) as most English translations do. Among other widely used translations only Robert Young's Literal Translation, the American Standard Version (1901), and the Jehovah's Witnesses' New World Translation (1950) have followed this practice (the latter introducing the Name in their New Testament over 200 times, though not occurring in the extant koine Greek text). However, even the footnotes of many editions (such as the 1961 Modified Notes Edition) of Darby Bible's New Testament indicate where "Lord" ("Kurios" in Greek) in the scripture text probably refers to Jehovah. The 1961 Modified Notes Edition of the Darby Bible includes the 1871 New Testament Preface, which says in part "All the instances in which the article is wanting before Kurios are not marked by brackets; but I give here all the passages in which Kurios, which the LXX employ for Jehovah, thence transferred to the New Testament, is used as a proper name; that is, has the sense of 'Jehovah.'" It then gives a listing of those places.