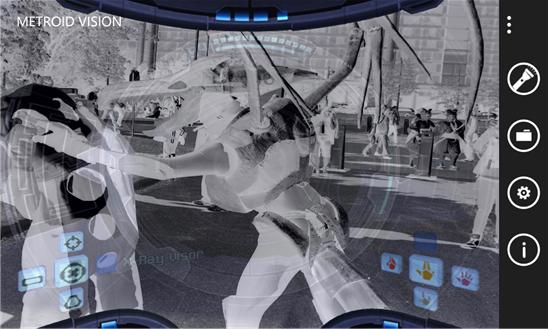 Metroid H.U.D. Lens See the world through Samus's eyes. Take photos with the X-Ray visor, thermal visor, dark visor or battle visor . You'll see the world in a different light, use the visor to search fro traces of space Pirates in your home (p.s. don't look under the bed if you're a nervous type).++ Save the live video feed as a photo on phone.+++ You can apply the visor effect to images stored on your phone, either photos or downloaded pictures. Now works as a lens , start up your camera and then select Metroid H.U.D. Lens from the list of available lenses. This app is Free, has no in-app purchases or Ads, all we ask is that you post a positive review if you enjoy using the app. 6 different effect (none is one) can be applied to any visor H.U.D. (Heads Up Display), Photos can be saved in high definition for extra clarity or low definition for speed. Use your camera’s flash+ as a torch mode for exploring in the dark. Ever wondered what Samus Aran, the main character and heroine, is a bounty hunter, though in Metroid she was known as a "space hunter". She wears an extremely powerful and adaptable exoskeleton known as the Power Suit, which was made for her by the ancient Chozo sees, well now you can. Hopefully we can include visors from all the games (Metroid, Metroid II: Return of Samus, Super Metroid, and Metroid Fusion), (Metroid: Zero Mission), (Metroid Prime Pinball), (Metroid Prime: Hunters), the Metroid Prime Trilogy (Metroid Prime, Metroid Prime 2: Echoes and Metroid Prime 3: Corruption), and Metroid: Other M. + May not work on all phones ++ X-Ray, Thermal and Night Vision may need to be simulated on your phone. +++ This is a just a photo frame and filter app. ++++ Email us your pictures if you want them to be used as screens in the store. added Red effect Added canon option More Pirates