This is mobile version of General. Original version created by Dmitry Gusarov for PC.2 to 20 countries can take part in the game. You are the ruler (king, ... Read More > or Download Now > 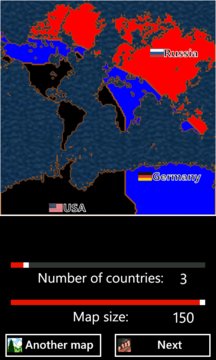 This is mobile version of General. Original version created by Dmitry Gusarov for PC.
2 to 20 countries can take part in the game. You are the ruler (king, president) of one of them. Your goal is to conquer the world, destroying all the other countries.
In the game process, you will have to resolve issues in economy, science and military politics. You are going to train scientists, recruit soldiers and hire generals. You can put your stake on science or build a militarist state. Whatever you do, however, you will have to go to war at some stage. If you are passive, others will kill you!
The best feature in «The General» is its extremely strong computer intelligence! Just try it and see for yourself. Computer players are not confined to a rigid behaviour scheme and can adequately react to the actions of other players. Besides, the computer does not peep and spy after the human player, which is so common in many other computer games. It’s just very clever.
Version 1.15:
- no ads
Version 1.14:
- armory added
Version 1.10:
- online mode
Version 1.7:
- Spanish and Portuguesse languages
Version 1.6:
- Fixed game crashes after loading saved game.
Version 1.5:
- Development graphs added
- Improved performance
- Deleting multiple saved games
- Balance changes
- AI behavior changed