Nanofights is back with a new mode of a trading card game (TCG) in combo with Tripple Triad, even more battles and a lot more action. There are more then ... Read More > or Download Now > 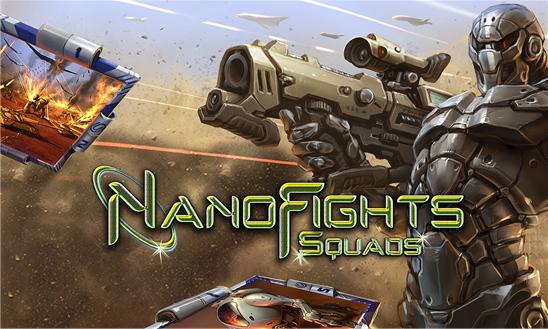 Nanofights is back with a new mode of a trading card game (TCG) in combo with Tripple Triad, even more battles and a lot more action. There are more then 300 different tokens out of the huge Nanofights Universe. Collect tokens and conquer your friends with your deck of five individual tokens. You have to compete with others and upgrade your own creatures. Overthrow your opponents, but be aware of the enemy units on your way to the top! There’s a war going on at the battlefields of the Nanofights Universe. Nanofights Squads – A universe in war! ===== How to play ===== ● Use simple touch controls to lead your tokens into battle ● Build your deck at the flick of a finger across your screen ● Upgrade your tokens, your creatures, buildings and towers ● Battle against thousands of players across the World to become the one ruler of the universe! ===== The story so far ===== A Universe at War We are in distant future. Only 100 years ago the first robots started a rebellion and put the empire of the United Civiliezd Worlds in the biggest chaos they ever had and many many worlds are lost to the so called Mechanoids. On this world, most intelligent organic life was either terminated or driven out by force by their former servants. Many people still remember their banishment from their homeworlds and the loss of so many friends. ...and on which side will you be, when the fate of the universe will be decided, commander? Download for free and start the fight for the ruler of the universe now. You too can be the most powerful commander! - Booster Packs On Sale Now! - Improved performance in online games.