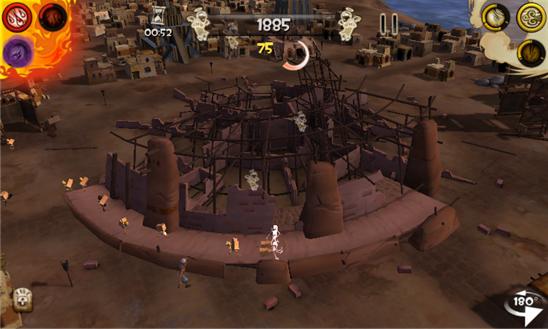 Step into the sacred sandals of a great, almighty, and very angry deity. Hurl bolts of holy lightning, summon punishing earthquakes, and unleash vengeful floods upon the foolish and irreverent Humans to prevent them from building the tower of Babel. - Destroy the Defiant Idols of Human Vanity Prevent towers of Babel at various times in history, featuring an exciting 15 mission, single-player campaign. Improve your Godly stamina in Survival Mode. - Only a God can rise to the challenge! Express your wrath against insolent workers led and strengthened by: o Protective Priests who shield workers from your spells. o Sacred Urn Porters who slow down your powers. o Siege Towers that help humans to access upper levels faster. o Cargo Ships bringing stones to the yard. - Control the Elements Access twice as many powers as in the original game. Learn elemental attacks based on fire, water, earth and air, each with its unique effect depending on the target: the Rolling Stone, Sirocco, Meteorite Shower and many more. - Expand the Experience Collect Babel currency through gameplay or via in-app purchase and use it to buy scrolls, passive powers and levels to improve your skills and your gaming experience.