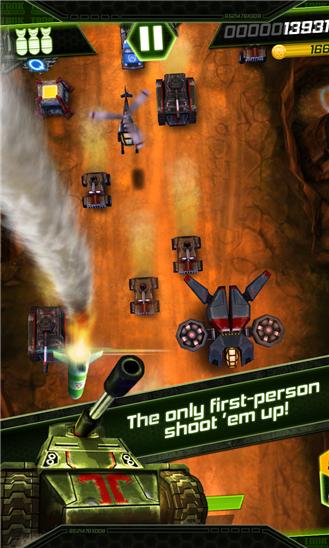 ** Awarded as Best Mobile Game of SBGames 2013’s Independent Games Festival ** Voice-over and soundtrack by the unparalleled composer Carl Clark GET READY FOR WAR Prepare yourself, soldier! The maniac villain Terror has readied his devious machines for war and is launching a massive offensive against our allies’ bases around the world! Being a prodigious bombing specialist, you’ve been summoned by General Rogers to put an end to this threat! INSPIRED BY THE 80s ACTION MOVIES Over-the-top explosions! Lone wolf antiheroes and machiavellian foes! The 80’s are back in full force here, so you’d better call all your expendable mercenary friends and be ready to crush your enemies! A MODERN AND TACTICAL TAKE ON ARCADE SHOOT ’EM UPS Tank Invaders will bring back those glorious days of being in command of missiles to fend off invaders from the space and raid the enemy over the river. Power-ups, waves of enemies, powerful giant bosses – they’re all back! YOUR FINGERS WILL BECOME LETHAL WEAPONS With intuitive touch-based mechanics, you’ll control unstoppable missile launchers, deadly machine guns and special magnetic bombs with your bare hands – and it will feel like you were born to do that! HUGE, INTENSE BOSS ENCOUNTERS From the heavily armed Destroyer to the legendary flying fortress Thunderhawk, you’ll face colossal enemies that’ll keep you on your toes and will not be defeated until the bomber spirit in you is completely unleashed! LEVEL-UP AND UPGRADE YOUR WEAPONS AND GADGETS Join the army as an inexperienced recruit and gradually earn experience and Rogers’s respect to climb up the military ranks! Expend your earned war funds in weapon enhancements until one day you may become known and feared as a bombing legend! ==================== What's new in v. 2.0.0.0 ==================== SPECIAL MISSIONS Starting on level 4, you will now be able to generate special missions with random effects to shape your matches with completely new dynamics, scenarios, objectives and rewards! Destroy countless waves of enemies using an OnFire Mode with infinite ammo in the dangerous lava reef, defeat an unstoppable stream of bosses in the snowy wastelands, face the dreadful Immortal Destroyer in the desert wastelands, and much more! ----- If you enjoy the update, don't forget to leave us a rating to support the development of the game!