Hey there all you dirt bike fans Old School Racer is back for more with a brand new game. Use the promotion code "nokia2014" to get ... Read More > or Download Now > 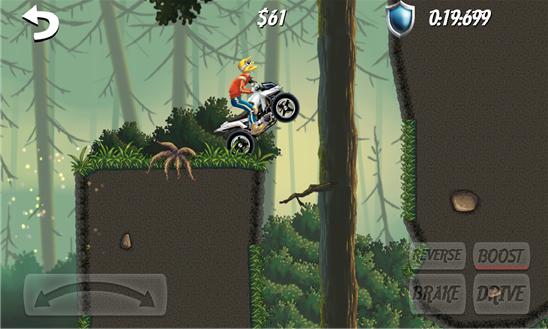 Hey there all you dirt bike fans Old School Racer is back for more with a brand new game. Use the promotion code "nokia2014" to get 20,000 credits for a limited time only! So Download now and use it before the offer expires. Race across 40 unique and amazing levels with twists and turns everywhere. We have a brand new mechanic added to the game......MORPHING! The world will literally morph at times creating extra paths, platforms, jumps and drops to help or possibly hinder your performance. If you get bored of single player why not try out our new multiplayer mode. You will be racing against players of similar rank to you, gradually increasing your reputation and rank as you race and try to become the best player ever. Old School Racer also boasts different types of vehicles, no longer do we just have bikes. Select from motorbikes, quad bikes and buggy’s all with varying stats and ability. Old school racer graphics are the best we have produced to date. What we have here is one of the best looking 2D games on Windows Phone. Stay tuned for future updates that will add more customization, livery’s and levels. Features: • Optional Adverts That's right a free game where you can turn the Adverts Off completely! In fact everything in the game is possible to attain just by playing it for a long period of time. • Stylish and charming 2d graphics! • 40 speed and skill trick levels to beat! • Over 2 worlds with hidden notes, each of which give a big pay day reward. Can you find all the hidden notes? • Competitive Multiplayer! • Different Vehicles! • Level progression! As you level up more will be unlocked to you and your stats will increase giving you an edge to beat the leaderboards or attempt to dominate multiplayer. There is no level cap. • Vehicle Mods! Improve your favourite vehicles with increased acceleration, brakes, top speed or boost. • And it just keeps getting better! We plan to update the game with many more features. 1.1.0.2: 22/10/2014 Fixes startup crash on some devices. Fixed issue with world 3 1.1.0.0: 21/10/2014 The big update is here and brings a brand new world. Play through 20 new levels bringing the total to over 60. Many more improvements. Removed Championship mode. 1.0.3.1: 06/07/2014 *Bug fixs 1.0.3.0: 04/07/2014 *Fixed odd collisions with last quad bike. *Rewrote sending and retrieving of scores. *Added 4 new shop items. *Added new game Mode Championship *Added Championship Leaderboards *Added rewards for players *Added Share Button *Fix bug in paid retry not working in multiplayer *Special offers only show twice a week now *Added fluid dynamics (Will be used in world 3 when it arrives) *Many other bug fixes. 1.0.2.2 :19/06/2014 *Fix bug with error loading levels. *Fix bug with multiplayer *Fix bug with promo codes *Changed a few things to support world 3 when it arrives. 1.0.2.0: 13/06/2014 *Fix bug with leaderboard not working correctly *Multiplayer leaderboards now work and use a proper league system. *Made end vehicles faster and handle better. *Many bug fixes. *Added a reward for people who have already played the game. 1.0.1.1: 23/05/2014 *Added Tutorial For "The Games" *Made minor changes to world 1 levels *Fixed bug with Leaderboards *Increased reward for rating game. 1.0.1.0: 22/05/2014 *Fix issue with game not loading on some phones. *Added "The Games" (5 exciting challenges) *Many performance improvements. 1.0.0.3: 21/05/2014 *Multiplayer will now give you higher rewards. *Scores are now accurate to 1 thousands of a second. *Improved UI. *Fixed bug where game would occasionally freeze on loading. *Multiplayer bug fixes *Fixed bug with leaderboards not updating correctly *Added support for new dynamics for up and coming update codenamed "The Games" 1.0.0.2: 14/05/2014 *Added HD support (Game will now render in HD) *Added visual setting in the menu (You can now conserve battery power by lowering setting)