Published By Action and Simulation Entertainment

Take control of the wheel as you aim to become a public transport mogul and build a successful taxi company. With a highly detailed taxi to drive and a huge ... Read More > or Download Now > 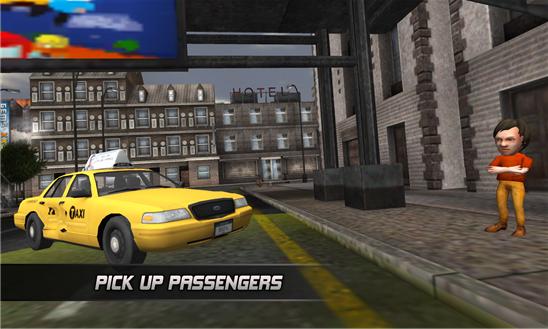 Take control of the wheel as you aim to become a public transport mogul and build a successful taxi company. With a highly detailed taxi to drive and a huge map featuring everything from the inner city to the parking lot, hills and country roads, the choice of route network is yours. New York Taxi Driver Sim 3 D, you must maneuver through the city and other locations. Train to transport passengers and become one of the best drivers in town! THE TAXI CAB , Ä®The Taxi is realistically modeled and features both first person and third person view perspective. Third person view will give you the best overview, while first person, gives you that immersive, Äúdrivers seat,Äù experience. The highly detailed cab model is relatively easy to drive and you,Äôll be amazed by the true to life physics of the carriage. The taxi uses a manual throttle, but there is no need to use manual gear changes. This results in a relaxing experience where you can drive your car with intuitive touch controls. Acceleration and braking are controlled using the touch buttons. The brake also acts as the reverse. THE CITY Your practice runs take place in a city where you can freely roam the highway and small inner roads. The open space is ideal to take your coach for a spin without risking an accident. The level also boasts a wide parking lot in Which you can train your parking skills to the max. Can you park your cab neatly between the lines? Venture through the city and you can climb hills. RAMPS On several points on the map you can find irregularities in the road and ramps. Can you successfully navigate your taxi over these obstacles? Only a true and trained chauffeur will be able to take these challenging hurdles. KEY FEATURES: + Open free roaming world + Detailed cab-models with realistic driving physics provide you with a high grade of true-to-live feeling + Intuitive controls + Freely organisable routes + Damage Model + 2 camera modes + City and rural locations that have obstacle courses + Free Ride mode - you can go anywhere, there are no restrictions + Relaxing sandbox experience, no other traffic + Beautifully detailed 3D visuals + Crisp HD graphics HISTORY OF NYC TAXI CABS Taxi cabs are both loved and hated by New Yorkers. They serve as a quick and easy means of transportation across Manhattan, a route not amply served by the subways. The downside with having an abundance of cabs is the traffic that results. Most traffic-jams in mid-town are speckled with many of the over 10,000 yellow cabs that service the city. The first taxicab company in New York City was the Electric Carriage and Wagon Company, Which began running 12 electric hansom cabs in July 1897 The company then built the Electrobat electric car, and had up to 100 taxicabs running in total by 1899 in Bu 1907 a fire destroyed 300 of the company's vehicles causing it to shut down. Horsedrawn cabs once again became a primary means of transportation around New York City. The same year, Harry N. Allen imported 65 gasoline-powered cars from France and began the New York Taxicab Company. The cabs were originally painted red and green, but Allen repainted them all yellow to be visible from a distance. By 1908, the New York Taxicab Company was running 700 taxicabs.   By the 1920s, industrialist recognized the potential of the taxicab market. Automobile manufacturers like General Motors and the Ford Motor Company began operating fleets. The most successful manufacturer, however, was the Checkered Cab Manufacturing Company. Founded by Morris Markin, Checker Cabs produced the large yellow and black taxis that became one of the most recognisable symbols of the mid-20th century urban life.