Millions of players are going to war and claiming their throne. Prepare yourself for battle! Join Throne Wars and build a mighty kingdom, forge alliances ... Read More > or Download Now > 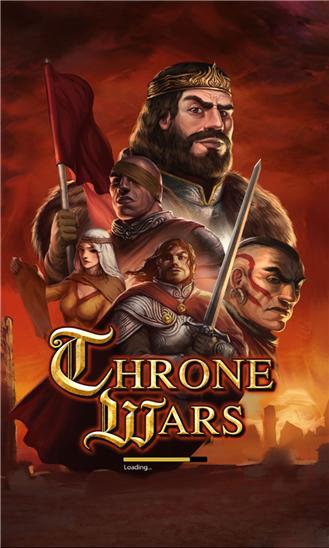 Millions of players are going to war and claiming their throne. Prepare yourself for battle! Join Throne Wars and build a mighty kingdom, forge alliances and unlock amazing prizes. >>> Top App in more than 20 countries <<< >>> Millions of players <<< Start out as a young regent of a single city, and go on to build an unbeatable kingdom! Dominate the battlefields, pillage enemy cities. Form mighty alliances as you compete with thousands of other Players on a gigantic map to answer one question: Who will be the King of Kings? Prove your cunning and bravery in THRONE WARS, the popular medieval building game. ===== User reviews ===== “Very fun game.” (gankmobile, Canada) “very addictive” (Nico250595, Ireland) “Fantastic! Only game I play” (17373gghdd, Canada) ===== Plenty of things to do ===== ● Gather your friends into a powerful alliance and dominate the leaderboard ● Grow your city to a formidable economic power ● Recruit powerful heroes as generals and governors ● Build a commanding army to fight against other players ● Found new cities and expand across the realm ● Learn to rule the realm in easy to play tutorial missions ● Raze your neighbors to the ground and plunder their wealth ● Research new technologies, build ever more powerful weapons ● Play with thousands upon thousands of other players on a gigantic map Download this game for free and start your own kingdom right now! ===== Note ===== This game requires an internet connection to play and offers in-app purchases. For optimum performance, please ensure that you have the latest system updates installed. ===== more about flaregames ===== http://www.flaregames.com • http://facebook.com/flaregames • http://twitter.com/flaregames Sire, we have good news! ● MORE CONTENT! Buildings now upgrade up to level 30. ● LESS COSTS! We lowered item prices.