Tired of smashing ants, squishing beetles and destroying all kinds of bugs and insects? Try to change the perspective and save a turbo bug’s life with ... Read More > or Download Now > 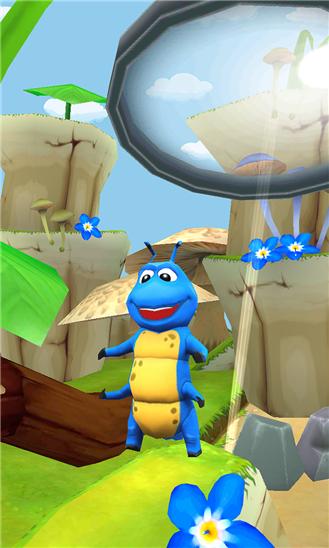 Tired of smashing ants, squishing beetles and destroying all kinds of bugs and insects? Try to change the perspective and save a turbo bug’s life with this fast-paced 3D running game, perfect for kids of all ages. Join the survival race and prove that your bug can sprint fast enough and gain sufficient speed to smash the competition and leave the mean bug exterminator behind! Experience a day of a turbo bug’s life and join the Survival RUN NOW! Save your tiny beetle, ladybug or ant character from the crazed bug-destroyer kid that’s chasing you with his magnifying glass! Sprint through the forest’s twisty paths and narrow bridges as fast as you can, while nimbly dodging tricky obstacles that are trying to slow down your dash to safety. Don’t let the mean kid get to you as even one wrong move can end your turbo run and turn you into an insect toast! The fight for survival has never been more intense! If you want to save your tiny bug’s life and stay in the race, you will need to demonstrate dedication, lightning speed and fast reactions. Those are all qualities a real turbo bug racer needs to master in order to destroy the competition and stay ahead of the exterminator kid. Try not to smash into the sneaky obstacles that hide behind every corner of the twisty track. Use your Turbo Jetpack for a super-fast sprint that not only helps you run further but also makes you invincible to all threats and dangers that are trying to destroy your tiny sprinter. Keeping your turbo run ON could be really exhausting. Help your beetle, ant or butterfly character run faster by collecting as many melons and cherries as possible from all over the course. Melons are the tiny insects’ favourite snack and help them run further or even resurrect when smashed. Use your melons wisely as they are harder to find! Collect as many cherries as you can to upgrade your bug - make it sprint faster, for longer or make it invincible to all power-downs and traps that you might hit while running! Make your life as a bug easier by keeping an eye for the various power-ups, mystery boxes and all kinds of bonuses that could be found throughout the entire course! Pick up a magnet and make sure that you don’t miss a single cherry that appears on your way. The lightning equips you with a turbo jetpack that not only improves your sprint speed, but also makes you invincible for all threats for the duration of the power-up! Features: - Multiple insect characters to choose from * Caterpillar * LadyBug * Beetle * Ant (coming soon) * Butterfly (coming soon) - Diverse Power-Ups - Crazy Goals - Endless Runner - Stunning 3D Graphics The tiny insects’ survival is in your hands! Will they live or will they smash and burn – it’s all up to you! Build up speed and keep the mean kid at bay. Destroy the competition with this smasher running game! STAY FAST, STAY ALIVE!