Pyramid is a solitaire game where the object is to get all the cards from the pyramid to the foundation. Pyramid Solitaire is a popular solitaire ... Read More > or Download Now > 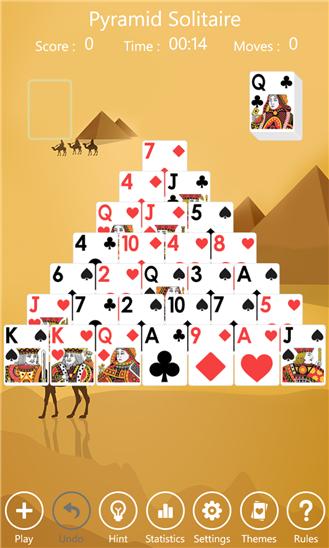 Pyramid is a solitaire game where the object is to get all the cards from the pyramid to the foundation. Pyramid Solitaire is a popular solitaire game for windows phone. This game comes from Ancient Egypt. Goal: Move all the cards to the Foundation (upper right). When the 'Easy' option is on, you only have to move all the cards on the table (tableau or pyramid) to win. Rules: You can move cards to the Foundation by Double-Tap or dropping a card on another, exposed, card. If the ranks combine to 13, both cards will move to the Foundation. Kings, being rank 13, move to the Foundation immediately upon being touched. If you like to relax with solitaire or puzzle games then we think you'll love Pyramid Solitaire*. The object of the game is to remove pairs of cards that add up to the total of the highest card in the deck from an arrangement of cards - a pyramid of 28 cards. When using the common French deck, Jacks value at 11, Queens 12, and Kings 13. So the highest value is 13. In the numbered Spanish deck the highest numbers are also the Kings at 12, so the pairs must add up to 12. To set up the pyramid, deal one card face up at the top of the playing area, then two cards beneath and partially covering it, then three beneath them, and so on till you have dealt out a row of seven cards for a total of 28 cards dealt. Refer to image. The remaining cards are placed to the side face down. This is the Stock. To play, pairs of exposed cards can be removed to the Foundation if their values total 13 (12 if using the Spanish deck). Thus, kings can be removed immediately to the Foundation. Cards must not be covered. Thus when an Ace rests on a Queen, that Queen can not be removed. You may draw cards from the Stock one at a time and match it with any exposed card. if no match is made the drawn Stock card is still discarded into the Foundation. Once the Stock is exhausted and/or no more pairs can be made, the game ends. To score, count the number of remaining face up cards in the pyramid. A perfect score is therefore zero, where all cards have been matched into the Foundation. Conditions for winning To be considered won, all cards (cards from the pyramid and cards from the stock) must be moved to the foundation; the game cannot be won if at least two cards cannot be moved from the stock. Variations -Relaxed Pyramid Solitaire: to be considered won, all cards from the pyramid must be moved to the foundation; the game can still be won with cards left in the stock. -Redeals may or may not be allowed. Three cards at a time from the stack, repeating until no matches can be made; placing all -cards totalling 13 in a stack. -Alternatively, seven cards are dealt below the pyramid. These cards can match each other exposed cards in the pyramid or from the stack. -Another addition is playing Pyramid Solitaire with a cell, filled either from the tableau or from the waste upcard. FEATURES + addictive gameplay + enchanting graphics set in Ancient Egypt + simple controls, easy to learn + atmospheric sound effects + a well made free solitaire game! + Unlimited Undo + Detailed Statistic