Donkey Kong Country 3 is a platform game where players control Dixie Kong and her cousin Kiddy Kong through 48 levels. Many of the gameplay elements from ... Read More > or Download Now > 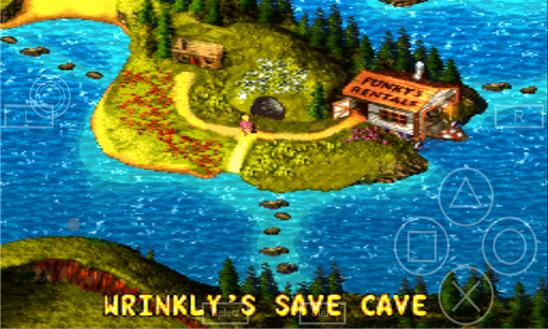 Donkey Kong Country 3 is a platform game where players control Dixie Kong and her cousin Kiddy Kong through 48 levels. Many of the gameplay elements from previous games in the series see a return in this game, such as barrels, animal helpers and co-operative play. Both of the two playable Kongs have unique abilities, such as Dixie's ability to slow her descent by spinning her pony-tail, and Kiddy's ability to bounce across open water. The Kongs can also throw each other around levels to break cracked floors, hit switches or reach secret areas. Levels in Donkey Kong Country 3 include a mixture of straight platforming, swimming and on-rails levels. They are based around several returning themes including Forests, Cliff-sides, Factories and Mountain tops, and a host of new themes, such as a pier and inside a mill. The level design is more diverse compared to its predecessors, with more complex puzzles and obstacles. For instance, in one level, Riverside Race, players are followed by a swarm of bees which can instantly kill them and must race to the end of the level against the clock. The game overworld is also more complex, allowing players to explore between each area instead of forcing them along a linear path. The game includes several vehicles such as a motorboat and hovercraft which can be used to traverse the overworld. Several animal helpers return from previous games, including Enguarde the swordfish and Squitter the Spider. New helpers include Ellie the Elephant, who can suck up water in her trunk to spray enemies with, and Parry the Parallel Bird who flies directly above the players character and can be used to collect out-of-reach items. As in the previous game, players can directly control animals instead of just riding them. Scattered around the Northern Kremisphere overworld are the Brothers Bear, a family of bears which provide the players with hints, key items or other services. Players can collect items in levels to trade with the Bears for other items or to help progress to later levels. Other members from the Kong family, such as Cranky Kong, Wrinkly Kong, Swanky Kong and Funky Kong can also be found around the overworld.