Oh no… The rival team has stolen the Cup even before the tournament has ended. It is up to you give chase, hunt down the thieves and claim victory for ... Read More > or Download Now > 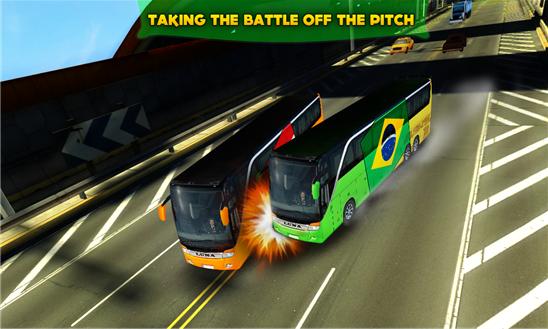 Oh no… The rival team has stolen the Cup even before the tournament has ended. It is up to you give chase, hunt down the thieves and claim victory for your nation! This high-octane racing game will put you behind the wheel of a national team’s player bus. The game is controlled with intuitive one-touch controls, but you will need to keep your head together to navigate through heavy traffic. Home in on the rival’s team national anthem and collect precious soccer balls along the way. Catch up to the enemy coach and ram it from the road to become your nation’s hero! Fair play? With each successful takedown money is earned which can be used to upgrade your national team’s coach. The bus can be reinforced with a heavily armored grille to increase crash resilience and ramming effectiveness, while aerodynamic upgrades will improve the vehicles’ handling and top speed. Other customization options include adapting the carriages’ rims and colours. Furthermore, it is possible to add and change neon lighting underneath your bus. Crack enough soccer team busses to become the 2014 Soccer Team Bus World Champion! Key Features: * High speed racing with intuitive one touch controls * All 32 national team busses and anthems are included * Adapt and personalise your bus to suit your new-found unsportsmanlike lifestyle * Stunning fast paced 3D visuals * Easy to grind bus parts and customization options, no in-app purchases required