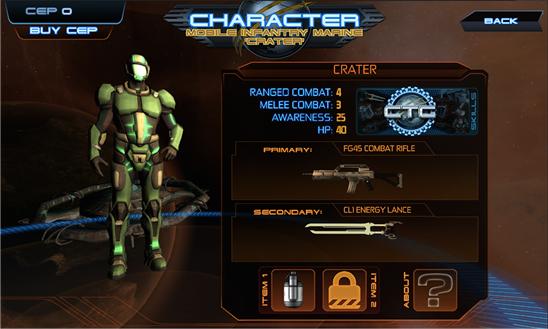 Made it into Apple’s Best New Game list on both Mac and iOS Appstores Made it into Touch Arcade’s Hot New Games list Made it into TUAW new and notable apps for iOS and OSX "The game has space marines, massive battle cruisers, speedy star fighters, a variety of guns, and plenty of explosions. That alone warrants a look." – Android Police "All in all, Line of Defense Tactics is one of the most convincing squad-based RTS efforts we’ve encountered." – Pocket Gamer "...it could be one of the best real-time squad-based RTS titles I’ve played in a while." – Joystiq Command a team of four Galactic Command (GALCOM) marines in highly classified missions across space stations, starships and vast planetary battlefields. Based on the world of the Line Of Defense MMO, train your team, upgrade their stats, weapons, inventory and abilities to become the ultimate fighting force. Play missions 1-3 for free. Then purchase the full 16 mission campaign for $4.99 Action filled storyline based on the Line of Defense comics. Real time tactical combat with a persistent team of characters. Fight the enemy in ship to ship combat, inside their bases, and on the ground. Command infantry, autonomous androids, and vehicles to complete your missions. Call in airstrikes, deploy turrets, and gain access to advanced weaponry as you progress. Access the Line Of Defense MMO game's unit and equipment database for intel. "Line of Defense: Tactics is a basic, but complex, RTS title in the palm of your hand and while the game is complicated at first if you stick at it you may find yourself playing an entertaining RTS Game." – ZOMGPLAY "So if you’re looking for a decent squad based combat strategy game now, Line of Defense Tactics is the game for you." – OnRPG Please visit our support forums & discussions http://www.3000ad.com/support/ Check out the trailer and find out more about the game at http://lodmmo.com/tactics