In Mussoumano Saving Latifas the haters and trolls have kidnapped Mussoumano’s fans while he was playing videogame.Mussoumano goes in an endless run after ... Read More > or Download Now > 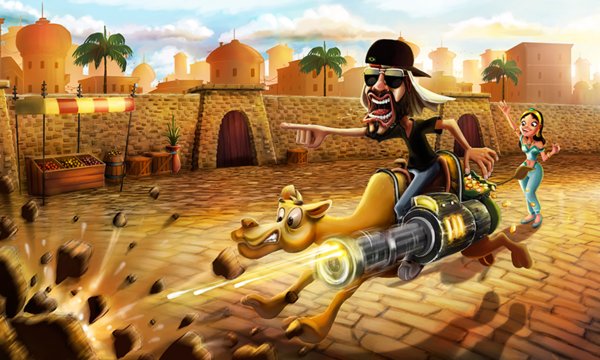 In Mussoumano Saving Latifas the haters and trolls have kidnapped Mussoumano’s fans while he was playing videogame.

Mussoumano goes in an endless run after his friends, trying to save them from the dirty hands of the haters and trolls.

It is a long run, many obstacles will be in the way but Mussoumano has the help of items and special transports like the Armored Camel, a spaceship, an incredible flying skate much like the Hoverboard from the movie Back To The Future, an amazing Dragon that spits fire and other different transports.

Mussoumano will run beyond the village, crossing the desert, beating the haters, facing a sandstorm, exploring a dark cave until arriving at the ruins of an ancient civilization where a giant troll awaits.

Mussoumano’s Armored Camel can be improved as long as you advance in the run and earn more game experience. Equipments, armors and special powers will help your Armored Camel to get stronger and take you farther in the run.

The visual of Mussoumano may be changed too. You may choose different clothes, glasses, hats and helmets to make your character look amazing in this endless run.

Join this endless run and help Mussoumano save his fans!