**Update: Added a new Activity feed that lets you see quickly what people have voted on your poll! Built specifically for the windows phone, Surv ... Read More > or Download Now > 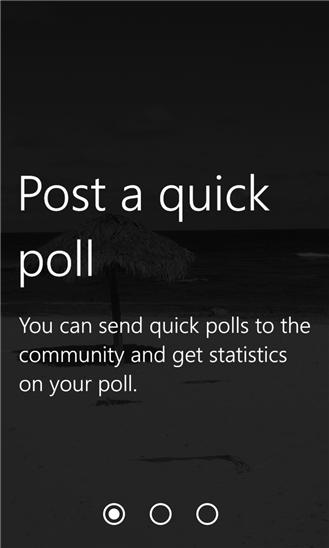 **Update: Added a new Activity feed that lets you see quickly what people have voted on your poll! Built specifically for the windows phone, Surv allows you to create and participate in quick polls on things that interest you. You can ask fun “What would you rather” questions, get the community’s feedback on something you are trying to decide on, or get the public opinion on a specific topic. You can also send a private poll to a friend to get their opinion. Here is how Surv works: - You can ask a question, tag it in a category, add up to three choices and optionally attach an image by using your camera roll or taking a new photo. - You can choose to post the new poll either to a friend to get their opinion privately or publicly to get feedback from the community. Participate in a poll by tapping a choice! Follow us on twitter @SilverBrainApps for comments, suggestions or questions Version 1.2.0.3: Bug Fixes Version 1.2.0.2: Minor Fixes Version 1.2.0.1: Minor Bug Fix Version 1.2.0.0: Update - Introduced a new activity feed that lists all the activities on the polls you have posted. - When filtering y a user (tap on the user info) you can see all the polls that the user have voted for. - Added a default image for users with no profile picture Version 1.1.0.2: Minor Changes - Moved Top rated box into the categories listing - Removed Welcome message box for first time users. Version 1.1.0.1: Bug Fixes - Fixed a bug when adding comments to a choice Version 1.1:Major Update! - Now you can add comments to your vote! just tap a choice, type a comment and hit post - You can also see a list of all the users voted in a certain choice in a poll. - The app now uses your windows theme color! - Basic statistics on a user is now shown on the user's profile including number of polls created and number of polls participated in. - A user can now also signup using Facebook. - Various bug fixes Version 1.0.2.1 Minor bug fixes Version 1.0.2.0 Enhancements Introduced ability to filter by newly created or top rated polls Bug Fixes: Profile images now show correctly in the listings Version 1.0.1.2: Bug Fixes, Yay! Version 1.0.1.0 Changes: Introduced categories and ability to delete posts.