Easy to pick up, impossible to put down. The sequel to Ragdoll Run, downloaded more than 4 million times, is finally here! Dawnbreak Studios ... Read More > or Download Now > 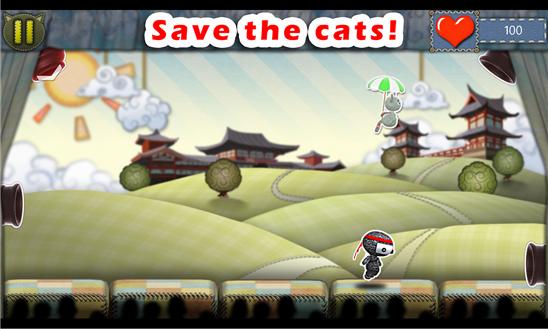 Easy to pick up, impossible to put down. The sequel to Ragdoll Run, downloaded more than 4 million times, is finally here! Dawnbreak Studios invites YOU to try the most addictive platformer in the store! Take control of the charming ragdoll ninja Dart and catch the falling cats while avoiding diabolic traps in this fast paced game. Thanks to the colorful graphics and competitive gameplay, this is the perfect game for both children and adults. GOODBYE TO PHYSICAL BUTTONS We know it´s usually really difficult playing platform games on a touch screen. We went ahead and fixed the problem, just tap or swipe to move Dart step by step around the stage. CHALLENGE THE WORLD Compete against friends and family locally on your phone or in the online high score lists. Do you have what it takes to CATch the top spot? = FEATURES = - FREE – No In-App Purchases - Colorful high resolution graphics - Intuitive controls guaranteeing that YOU are always in full control - Fast paced gameplay - Compete in online leaderboards - Collect trophies to challenge yourself - Soundtrack by Alexander Darland The ragdolls are back...and this time it´s purrsonal!