Smash your way to a new high score in this deceptively simple and endlessly fun. Help Humpty Dumpty smash to gates of the castle and catch the ... Read More > or Download Now > 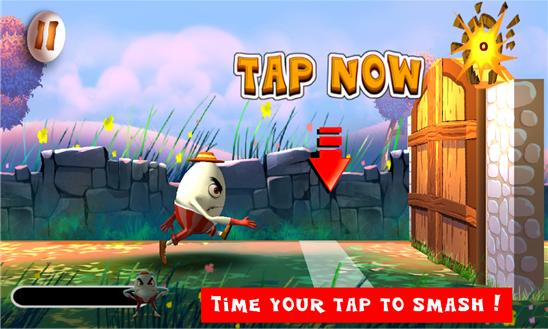 Smash your way to a new high score in this deceptively simple and endlessly fun. Help Humpty Dumpty smash to gates of the castle and catch the troublesome king ! Your goal is to run as far as you can through the huge kingdom busting wooden gates blocking your path. The controls are plain simple, Just tap to smash! But you think thats easy ? do you ? Tap too late and Humpty dumpty cracks ! Tap too early and Humpty Dumpty falls flat. You'll need to time each smash just right. How far can you get? ★ Tap to smash through gates ! ★ Time your tap just right ! ★ Score points for each smash ! ★ Compete for high scores ! ★ Perform consecutive smashes to unleash the boiling anger of Humpty Dumpty ! An WP8 game by CAIN mGames Studios --- ★★ PLS LEAVE COMMENT AND RATING ★★ --- For any suggestions, please email at mgames@cain.in *** Humpty Dumpty Smash is FREE to download and play. This app/game DOES NOT offer any in-app purchases. *** *** "Humpty Dumpty Smash" WP8 game has been tested on various devices to ensure optimum gameplay. If for some unknown reason it does not run on your device then please do not give us a negative rating and/or comment instead send us the device model along with description of error at mgames@cain.in, we shall try our best to find solution for the same, thanks CAIN mGames Team *** ★★★ 2 new costumes to play with ! Each with new style !! ★★★