No.1 Shooting game with Aliens has Arrived Be the last witness of dying city. Become the first hope of dying humanity. Shoot, kill and prevail by defending ... Read More > or Download Now > 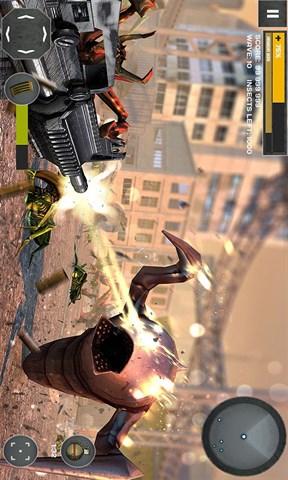 No.1 Shooting game with Aliens has Arrived Be the last witness of dying city. Become the first hope of dying humanity. Shoot, kill and prevail by defending your trenches in this acclaimed first person shooting game. Download for Free Now! Features included: - epic campaign in a ruined city, - become a hero in the middle of an alien invasion, - beautiful environment of ruined city to die in, - crazy aliens to kill, - millions of aliens with mixed feelings towards you, - tons of bullets which want to hug your enemies, - defend your trenches and progress through the city, - experience dramatic storyline twists Ruined City Experience the call of duty and start fighting off an alien invasion in horrific (yet beautiful) environment of a ruined city. Frontline warfare taking place in destroyed human cities full of modern combat. Alone in Trenches Barricaded in trenches with your finger on the weapons trigger and surrounded by the dead. Frontline battle full of bullets, weapons and space monsters. Deadly Weapon Bring hot, steamy iron death on your enemies, hunt them down like they were just defenseless deer. Take your weapon and send a barrage of bullets in modern warfare. Your duty wouldn’t call and wait - you can’t hesitate, just kill, shoot, and vaporize them with unusual determination. Psychological Background of Hero Left by his family, former war hero had no sense of meaning in a world of peace and happiness. When the first alien ships darkened the sun he was almost happy. Battle has come and the armies are preparing - his world and his greatness will come again. Battlefield was his natural environment and that’s why he was born and raised. After dramatic defeat of army in huge battle for the city he decided to take the modern combat into his hands. He took his favorite gun, and became the doom of the frontline commando enemies. Born for duty, called by fate, bringing death with his weapon trigger.