Battle Droids is a remake of the popular multiplayer action game, Bomberman. Customize your droid! Enter the arena against up to 4 players from ... Read More > or Download Now > 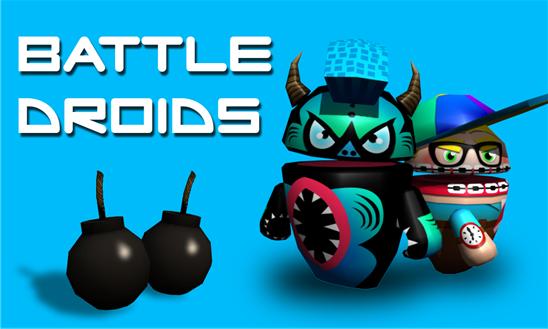 Battle Droids is a remake of the popular multiplayer action game, Bomberman. Customize your droid! Enter the arena against up to 4 players from all around the globe. Your goal is to defeat your enemies using your bombs. Collect and use different powers to gain advantage over your opponents. Watch out for the deadly curses that can easily cause you trouble. Battle Droids delivers one of the most exciting real-time multiplayer experiences ever for free! PIMP YOUR DROID * Customize your droid with 50+ skins * Be unique and choose from 10+ addons * Select from 15+ gestures and show off after each match RULE THE ARENA * 2 beautiful multiplayer arenas for up to 4 players * Fully randomized gameplay with destroyable blocks and much more * Prepare for Sudden Death if you are not fast enough CHOOSE YOUR PLAYSTYLE * Master all powers to defeat your enemies * Learn to avoid curses or take advantage of them * Level up your droid to unlock new talents and choose the ones that best fits you TOUCH CONTROLS * Virtual joystick - Movement * Virtual buttons - Actions _____________________________________________ Visit our official site at http://www.obumogames.com Like us on Facebook at https://www.facebook.com/obumogames Follow us on Twitter at https://twitter.com/ObumoGames Check out our videos at https://www.youtube.com/obumogames +1 us on Google Plus at https://plus.google.com/+ObumogamesEnterprise ____________________________________________ This game allows you to purchase virtual items within the game and may contain third-party advertisements that may redirect you to a third-party site. v1.1.1 - June 30, 2014. - Gameplay optimizations and design improvements. v1.1 - June 13, 2014. - You can now play against bots while waiting for other players. Opponents will seamlessly join your match while you play, so you don't need to leave to find others. - Minor bug fixes and improvements. v1.0 - June 4th, 2014. - Initial release of the game.