The best game for all mobile phones. Battles, adventures, companionship and love - all an integral part of our world.Fight epic battles, slay evil monsters, ... Read More > or Download Now > 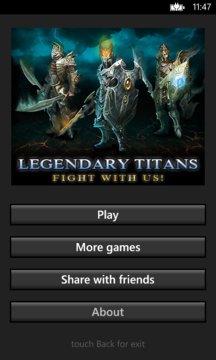 The best game for all mobile phones. Battles, adventures, companionship and love - all an integral part of our world.

Fight epic battles, slay evil monsters, advance your character to the highest level!
Legends come true. Legendary Titans is back. Dark forces and wizards create chaos. It's up to you whether you are able handle the weapons, found a league, rule the land, win the bloody battle and become the ace of aces. Or are you a lost soul who yields to the times. Gain the goodwill of the Gods. Join the knight's guild. Cross blades with your rivals.
Become one of the elements in this world of fantasy. Lord knows who can build up an empire and save the Universe. The final battle is near at hand. Show yourself at last. Fortune favors the brave!
Equip your character, then battle enemies, demons and other children of evil!
Improve your equipment, mine arms in the forge, complete quests and make your character as advanced as possible!
Lead your character to glory!
Application for players lets you:
- play on both mobile phones and computers
- win battles and smash your opponents
- choose a character and name him
- learn fighting magic and attack your enemies with all the power of your spells
- find devoted and fearless brothers in arms by joining clans
- artifacts help you win a victory over even the most lethal barbarians and vermin's
- invite your friends to play via e-mail, sms, or social networks such as Facebook, Twitter and Mail
Clash of Legendary Titans (RPG) is based on elements and the playing process of traditional board role playing games.
Typical for our RPG is to have quite a large array of features for the main character which define his power, ability and fighting capacity. You can improve your statistics by killing your enemies and completing missions.