The epic first expansion pack for Alpha Invasion! Haven't yet played the popular game Alpha Invasion? Don't buy this yet, go play that instead! ... Read More > or Download Now > 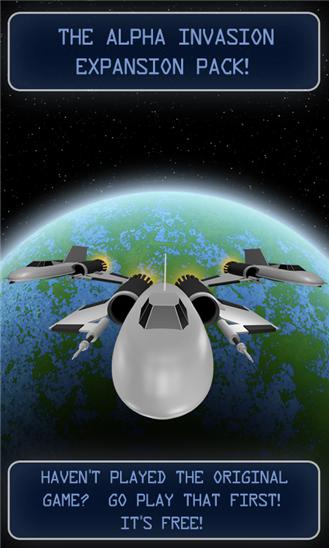 The epic first expansion pack for Alpha Invasion! Haven't yet played the popular game Alpha Invasion? Don't buy this yet, go play that instead! It's free! This expansion pack focuses on Battle Mode (there are no story levels in this pack). Battle Mode is now expanded to include the following features: 1. Space radiation levels can increase the risk of long-range attacks, adding powerful, strategic advantages and defenses. 2. Delayed capture times can increase challenge by forcing players to hold their ground, but also allow them to disrupt enemy production temporarily with quick, small attacks. 3. By activating reinforcements, the balance of a game can shift quickly, when just before you crush your enemy he is boosted by surprise reinforcements. But remember, you might be saved this way too! 4. You can now play with Coreworlds filling the entire map, in addition to the usual Coreworld gameplay. 5. Alpha planets are also available in Battle Mode now! Oh, and there are no ads! If you have any questions about what this expansion pack contains, you can always ask me on twitter @dastopher, or on my website, www.GabodaGames.com. Enjoy! New in version 1.1: - Fixed an issue keeping players from earning some achievements. More content coming soon! Stay tuned!