Published By Action and Simulation Entertainment

This game let’s you freely explore the environment in a thorough bread sports car. Race, perform stunts and drift your way through the city and the ... Read More > or Download Now > 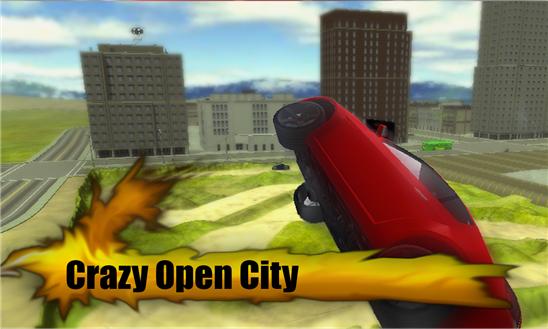 This game let’s you freely explore the environment in a thorough bread sports car. Race, perform stunts and drift your way through the city and the off road test track. Enjoy the scenery as you burn your tires to the max! The city has an off-road test track to test your suspension and driving skills. There is also a parking lot that can be used to practice doughnuts and the highway is ready for your blistering speeds! The art of doughnut or driving: A doughnut or donut is a maneuver performed while driving a vehicle. Performing this maneuver entails rotating the rear or front of the vehicle around the opposite set of wheels in a continuous motion, creating (ideally) a circular skid-mark pattern of rubber on a roadway and possibly even causing the tires to emit smoke from friction Other terms used for describing this maneuver include "spinning sedys / doing a sedy", "making cookies / cutting cookies" or “spinning brodies” Doughnuts are more easily performed on wet and frozen surfaces (ice and snow), as well as on loose surfaces, such as dirt. When performed in the snow, it is more often done to have fun than it is to make an earnest attempt at creating the circular skid mark pattern. In Australia, doughnuts performed in dust or mud are colloquially referred to as "circle work". Performing the doughnut maneuver can be hazardous. Strain is placed on the vehicle's suspension and drivetrain, which may result in mechanical breakdown with loss of control. Tires are also subject to severe wear which may result in a sudden loss of pressure. In snow, however, the strain placed on the vehicle is much less. Hence, rally drivers prefer to learn car control in such situations. Key Features: + 2 views (third person and cockpit) + Three ways to drive the car + amazingly realistic car handling + lose to life physics and damage model open world