Lead German forces on the rise towards the East or defend mother Russia on the Soviet side. Choose the right tactic of warfare and earn your stripes as an ... Read More > or Download Now > 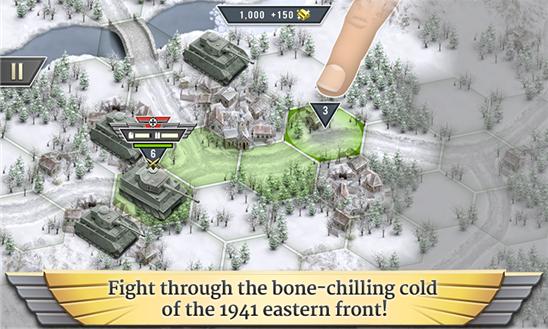 Lead German forces on the rise towards the East or defend mother Russia on the Soviet side. Choose the right tactic of warfare and earn your stripes as an ingenious Commander at the FROZEN FRONT! 5/5 Strategy at its best, can’t stop playing! 5/5 Pure eye candy! Experience mind-blowing World War 2 battles in the brilliant new military STRATEGY-sim by HandyGames™! *** MISSION BRIEFING *** - FIGHT through the bone-chilling cold of the 1941 Eastern Front! - COMBAT enemy positions with tanks and infantry! - SHOOT hostile headquarters with mighty bomber wings! - EMPLACE your artillery in rough terrain! - SUPPLY your army with goods and ammunition! - DEFEND yourself against superior numbers of enemies! *** Features *** - FREE TO PLAY - Turn-based strategy action in WW2 - Thrilling campaigns and challenging missions - Hot-Hand multiplayer battles - Historical German and Soviet units - Repairs, camouflage and fortification of units during the battles - Infantry, artillery, tanks and warplanes for both fractions - Hex grid for the best overview possible - Detailed graphics and super-realistic sounds You can play 1941 Frozen Front entirely for FREE, though various items are available via in-app purchase. If you don’t want to use in-app purchases, please deactivate them in your device settings. Thank you for playing 1941 Frozen Front! Get in touch with HandyGamesTM: http://www.handy-games.com Join us on Facebook: http://www.fb.com/handygames Follow us on Instagram: http://instagram.com/handygames Check news on Twitter: http://www.twitter.com/handy_games Stay tuned on Google+: http://goo.gl/qkjngm Subscribe to our YouTube channel: http://goo.gl/2Kq6yY - Fixed billing issue