A Tower Defence game, that actually allows you to sit inside the turret and come face-to-face with the enemies! You are Commando Jack, the ... Read More > or Download Now > 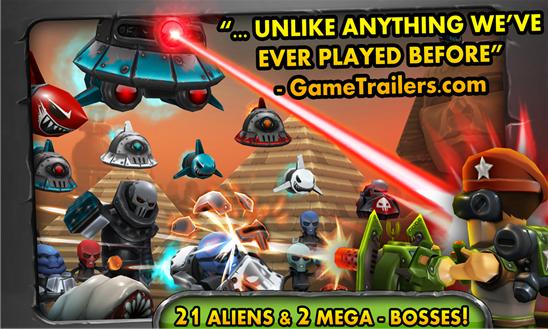 A Tower Defence game, that actually allows you to sit inside the turret and come face-to-face with the enemies! You are Commando Jack, the baddest, meanest, toughest soldier planet Earth has to offer, and it's up to you to save the world from alien invasion. Build a maze of towers to deal damage to the Aliens, and if that's not enough, jump into your turret and take those suckers down yourself! "...unlike anything we've ever played before on our mobiles" — GameTrailers "...deserve[s] attention." — GameZebo, 4/5 "It is just so satisfying to actually shoot at the enemies..." — 148 Apps, 4/5 Killer Features • 46 Levels • Campaign, Endless, Elemental, Mixed Game Modes • 38 Upgrades • 21 Weapons • 3 Powers • Multi-tier levels • 21 Enemies • 2 Mega Bosses • UAV - Fly around the battlefield dropping grenades! • Deploy HUGE nuke damage! • Turret Ranking System • Battle Technology upgrading system • Tower defence with first-person-shooter gameplay. Totally unique. • Stunning graphics, in full 3D. • Create your own strategic tower maze formations. • Tons of levels, hours of gameplay. • Three stars to collect per level. - In app purchases no longer say unavailable. - able to pause game on phone back button in game. - mega hack in app purchase should work