In a land where the only thing bigger than a hero’s heart is his head (literally), Battleloot Adventure creatively blends comedy, turn-based combat ... Read More > or Download Now > 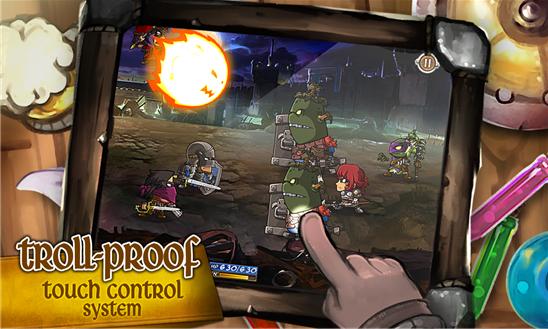 In a land where the only thing bigger than a hero’s heart is his head (literally), Battleloot Adventure creatively blends comedy, turn-based combat and role-playing for a whimsical adventure like no other! Battleloot Adventure will take you on an epic quest into the heart of Kameloot, a wealthy realm threatened by viciously grumpy monsters, ruthless mercenaries, fire breathing dragons and last, but not least, vexing taxes! Swear allegiance to your legendary city of choice, enlist a motley crew of adventurers and battle rival soldiers, magical entities, wondrous creatures and big, ugly, foul-smelling Orcs. Mix and match your gang’s skills and spells to unlock thrilling adventures and totally awesome weapons and equipment! RECRUIT & LEAD YOUR ADVENTURERS TO GLORY - Pledge your allegiance to one of four cities and earn fame and fortune - Recruit an assortment of adventurers, each with their own perks and unique skills - Upgrade and customize your characters and their abilities - Carefully choose your 3 ideal adventurers to face each danger ahead EPIC QUESTS & BATTLES - Brave over 60 quests, each including a unique feat to further challenge your skills - Super easy touch controls - Carefully arrange your team for battle, deploy your heroes in front and rear lines for the most effective offense/defense balance - Cautiously plan every attack, selecting the right characters and moves for each quest - Leverage Auto skills and Special attacks galore - Be ready to take action anytime in the battle with the Assist and Block commands - Master unique combos to rake up hits and collect stars to unleash Special attacks - Battle across different environments – some infused with magic and each affecting your adventurers differently BEAUTIFUL HAND-DRAWN GRAPHICS - Enjoy colorful comic-style graphics, combining zany animations and lush hand-painted backdrops